D ouglas E. Mollin, CFP, ChFC, CLU, CFS – Doug is a lifelong New Yorker, born in Queens. He has two boys, Eric and Brian. Doug has volunteered at his parish’s CYO program for 20+ years. He still plays in his weekend basketball games himself, along with volleyball and golf when he can. He loves to cook (but not necessarily to shop or clean), getting out to hear live music and seeing his NY Knicks play whenever he can. 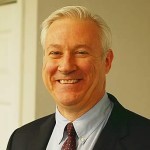 Graduating in 1983, Doug pursued his passion in finance and investing, starting at E.F. Hutton’s Personal Financial Division in 1983.

BDO Seidman (national accounting firm) from 1987 to 1989. Assistant Director of Financial Planning. Responsibilities included overall strategy development for each client, implementation of planning strategies and on-going asset management. During this time, Seidman Financial Services grew to be the largest fee-only planning firm in the country.

In late 1989, Mr. Mollin began work as a consultant for Enright Financial Advisors. In 1999, he became vice-president and in 2001, he became a partner in the new firm, Enright, Mollin, Cascio & Ramusevic (EMCR).

Certified Fund Specialist (CFS). The designation is granted by the ICFS for advisors with particular expertise in mutual funds.